Parties in the Treaty

This partition serves to legally and fairly partition the former territories of the now-collapsed Ottoman Empire, once ruled by Sultan Finn Hamm Erdogan. These territories were made vacant at the recent abdication of Sultan Erdogan on the 23 of February, 1751.

The former Sultan attempted to partition his Empire through the “Partition of 1751", an act which is both illegal under the Vienna Accords under Section I, Clause II which states, “If an individual desires to claim a country, they must have the intent on holding possession of their country for a period of 10 - 12 months (at least a year), before they are able to concede their entire claim of the country to another country.” The proposed partition also violates Section I, Clause IV, which states, “All new countries that participate in land deals after the 3 month period, cannot cede their historical region containing, their capital until after the period of 10 - 12 months (at least a year).”

In addition, Finn Hamm's partitions were made to give nations with contradicting pieces of land that would easily provoke war and conflict for his own enjoyment. That the partitions before would have caused a creation of 20th century states including ISIS, and giving cities and territories other nations could never reach by land or sea.

The British government worked through the evening to formulate a fair and equal partition plan, that evenly splits the territories of the former Ottoman Empire, and cannot be traded or ceded for a period of 6-8 months after the signing of this document. This partition will entail that Great Britain shall receive Egypt and the entirety of the Arabian Peninsula, the Holy Lands (present day Israel, Palestine, Jordan, Syria, Lebanon, and Iraq) shall be ceded to the Kingdom of Spain, that the Kingdom of the Swiss will hold Greece, Crete, and the Balkans (Bulgaria), that the Austrian Empire shall lay claim to the entirety of extended Romania, that the Kingdom of Denmark shall receive Libya and Carthage-Tunisia, and that the Kingdom of Sweden shall lay claim to the Algerian coast. In addition, the Dutch Republic will be formally be returned the entirety of its colonies rightfully owned by the Netherlands under the reign of Stadholder Jarod I. Two independent entities, Turkey and Persia, shall be created, which may not be claimed by any European power and must be left open till a new claimant emerge.

The British government wishes to ensure that this partition is carried out as smooth as possible, and as fair and just as possible. HM Government will continue to work together with the nations of the world to promote the inherent rights that have been bestowed upon them. 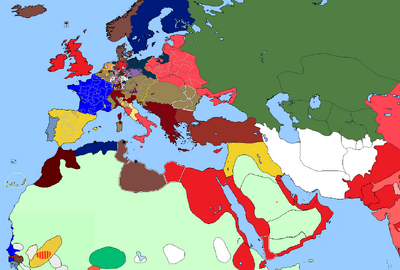