Thrthe following is a list of constituencies being represented in His Majesty's Parliament.

What is a Constituency?

A constituency is a district, usually composed of one or more counties, boroughs, or cities. Constituencies are subdivided based on population and location. Their primary function is to serve as a representative body in Parliament; every 4-7 months, an election is held across the Kingdom in which eligible voters (male land owners) elect a politician to represent their constituency in Parliament. These elected Parliamentarians make up the House of Commons, the lower chamber of Parliament (the members of the upper chamber, the House of Lords, are appointed rather than elected). Each constituency, regardless of population, size, or location, is granted equal power and representation.

There are currently 64 constituencies composing the House of Commons: 42 are in England, 15 in Scotland, and 7 in Wales.

Below is each constituency listed in accordance to region. Also displayed are the constituencies' locations, seats of administration, approximate population of eligible voters, and the current Parliamentarian representing that constituency (if applicable). 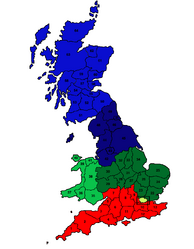 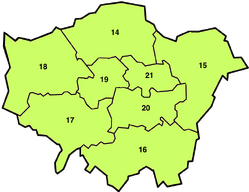